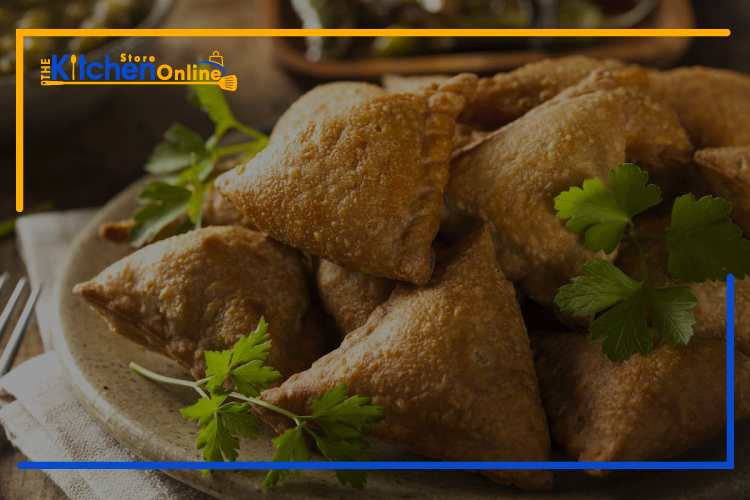 Samosas are crispy, warm, and spicy, and everyone loves them. Even if you have a favorite filling, you must prepare a samosa properly if you want it to be delicious – crispy on the outside, and soft yet tasty on the inside!

Many of us prepare samosas by buying them prepared and cooking them frozen. The samosas turn a lovely golden brown when cooked from frozen, as the freezer helps them remain crispy on the outside.

How do you cook frozen samosas? Samosas can be baked in the oven or air-fried, but deep-frying is the ideal method for cooking them. Microwave-frozen samosas can also be done, but the results are not as good as other methods.

The samosas are best fried, but you can also bake or cook them in an air fryer for healthier results. You can cook samosas from frozen however you like – here’s how!

How To Fry Frozen Samosas

Most people cook frozen samosas by frying them, and this method gives the best samosas!

Here is how to fry frozen samosas:

Note: Samosas should not be thawed before frying, since when they are fried from frozen, they crisp up and turn a beautiful golden color. Hence, they can be put straight into the fryer from the freezer.

During the frying process, frozen samosas become crispy and golden, while their filling remains delicious. The crispiness is more likely to develop when samosas are fried from frozen, as the heat shocks the pastry.

Using any other method of cooking will not provide the same crispness and golden finish, in addition to the flavor deep frying brings.

Samosas should not be fried because it is unhealthy. It is common knowledge that deep frying is not the healthiest method of preparing food, as well as the amount of oil you need to cook with.

There is nothing wrong with deep frying every now and again, but it is not healthy to prepare food this way often.

How To Bake Frozen Samosas

Samosas can be baked if you do not want to fry them. It’s not the most traditional way, but it’s healthier than cooking in oil, and the results are good.

Samosas can either be baked uncooked or pre-cooked. Follow these instructions:

You’ll want to bake frozen samosas at a higher temperature and for a longer amount of time if they haven’t been cooked.

Pre-cooked samosas make this much easier. Warming them up will not lose their crispiness, although, once again, the texture won’t be as good as frying.

It is healthier to bake samosas than to deep-fry them. The exterior will still be crispy and crunchy. Baking the samosas does not require excessive oil.

You can also make large batches of samosas at once, so they’re great for catering large gatherings.

Samosas baked in the oven have one con they need to be preheated for a while, which can take longer than other cooking methods.

The samosas may also burn if left in the oven too long, causing the filling to dry out. Be careful not to let it happen.

How To Cook Frozen Samosas In The Air Fryer

It is the healthiest way to cook frozen samosas if you have an air fryer at home.

By far, the healthiest way to cook samosas is in an air fryer, since there is no oil to be used. Air-frying them also takes less time than baking them!

Here is how to cook a batch of frozen samosas in the air fryer:

Pros of Cooking Frozen Samosas in an Air Fryer:

In an air fryer, samosas don’t have the same taste or texture as they do when deep-fried, but they come close, and that makes them a healthier alternative.

It only takes a few minutes to prepare them from frozen. In addition to crisping up the outside, the air fryer keeps the filling moist and flavorful.

Cons of Cooking Frozen Samosas in an Air Fryer:

Samosas cooked in an air fryer will not have the same taste as those cooked in a deep fryer.

In addition, you might need to cook a few batches at a time, as you cannot cook too many samosas at one time.

Can I Cook Frozen Samosas In The Microwave?

Although frozen samosas can technically be cooked in the microwave, it may not always be the best choice.

In this case, you would place the frozen samosas on a microwave-safe dish and heat them on medium heat for a few minutes until the samosas are warmed through and cooked.

They will not be quite as crispy as they would be if they were deep-fried or baked, and there is a possibility that some parts will be piping hot and others will be still cold.

You might only be able to cook frozen samosas in a microwave if you need them in a hurry, but it should be your last resort.

If you are a sweet chocolate lover then you definitely need to visit Can You Freeze German Chocolate Cake?

How Do You Thaw Frozen Samosas?

Samosas can be thawed in the fridge a few hours before cooking, or overnight, so long as they are kept at a temperature that is safe to consume.

You can also defrost the samosas in the microwave by using the defrosting function for a few minutes.

Can I Freeze Homemade Samosas?

Homemade samosas do freeze well, and you can freeze them.

In the freezer for a few hours, spread them out on a baking sheet. You can label a plastic freezer bag with the date you froze the samosas after they have frozen solid.

They won’t stick together when frozen if you freeze them on a baking tray first, so you can remove them from the freezer bag without defrosting the whole bag.