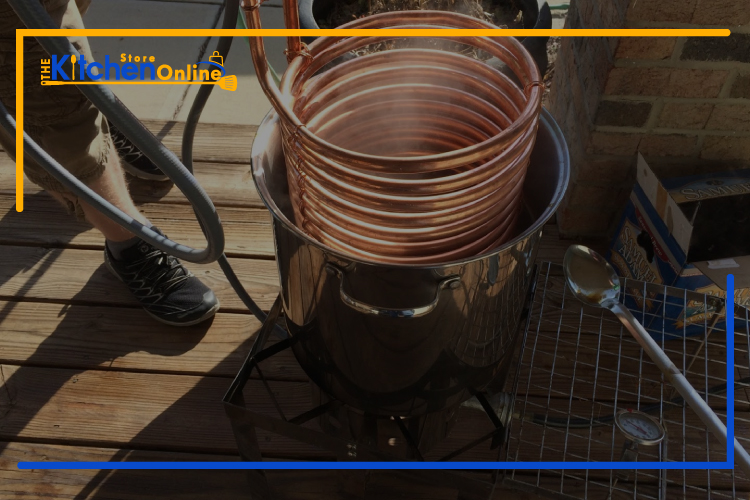 Do you enjoy brewing beer or whisky at home? Well, then you know how important a wort chiller is and have definitely used it at least a couple of times.

But if you are thinking about it as a hobby, you probably have no idea what we are talking about. That’s okay; we know this process can be quite intimidating to beginners but don’t worry because we’ve got you covered.

Here, we have the perfect guide on how to use a wort chiller for newbies. We’ll try to keep it simple and easy to follow.

Let’s talk a little bit more about a fun and interesting hobby without further ado and take our first steps to becoming a master homebrewer.

Before we learn about wort chillers, let’s get to know what worts are. If you are new to this, chances are this word has you completely stumped.

Imagine a cold glass of beer on a Sunday evening, watching your favorite sports bash it out. Now imagine that beer has no carbonation or flavor. What’s that? You’ve just drunk wort.

Wort is basically beer before we ferment it with yeast to get that flavor and carbonation that gives it the iconic and beloved refreshing feeling – making beers one of the most popular beverages in the world.

Technically speaking, the wort is the liquid extracted from mashing the grains in the brewing process, and it contains all the sugars; the most important of those are maltotriose and maltose.

The technical definition is a little complicated, but it is fine as long as you understand why it is so important to the brewing process.

What Is a Wort Chiller?

So, now that you know what wort is, let’s get to the titular equipment. What is a wort chiller?

Along with that, when the wort is above 80 degrees Celsius, it is most exposed to bacteria. So you need to cool it down as soon as possible to make sure that it is safe to consume. You don’t want to have infected beer; trust us.

Lastly, it also keeps the cold break safe. Cold break refers to the proteins and tannins that do not dissolve in the bear. These need to be preserved to produce a clear and tasty glass of beer.

How does it cool down a wort? This depends on what type of wort chiller you are using. You can use two types of wort chillers; immersion and counterflow. Let’s analyze them in detail now.

The Types of Wort Chiller

Before we know how to use a wort chiller, we need to know the difference between the types of wort chillers. Lucky for you, this is super easy as there are only two types.

These wort chillers, as the name suggests, need the wort chiller to be submerged into the wort. The chiller is attached to a hose or faucet, and it cools down to a very low temperature when water runs through it.

You might be wondering, wait, what if the chiller is dirty? Well, we have some great news here. The high temperature of the wort kills any bacteria instantly, so you don’t need to clean the wort thoroughly or sanitize it before use.

Make sure it isn’t totally dirty though, just because the bacteria is dead doesn’t mean it’s hygienic.

It isn’t great for the environment, though. It takes a lot of water to cool down wort. This can be considered waste as the alternative doesn’t require nearly as much water.

It’s also a great deal slower. Make sure you get a high-quality immersion wort chiller. Otherwise, you’ll be sitting there waiting for it to cool for hours.

Lastly, it’s a little unsafe. The hot water can exit the pipe and scald you if not handled with care.

If you don’t love the idea of using an immersion method, given its immense usage of water and the fact that bacteria could attack by the time the wort cools down, we have the perfect option for you in counterflow or plate wort chiller.

This is an entirely closed system with water and wort entering and exiting into the chiller. The chiller uses the magic of heat transfer using copper plates that take the heat from the wort and move it to the water entering the system.

This method needs you to sanitize the tubes used to collect and dispense wort into and out of the chiller. Otherwise, you’ll end up with a dirty mug of beer, and we keep saying this because it’s true; you don’t want that.

Other than that, it has unrivaled speed and uses very little water in comparison. It also gives you the clearest beer possible, thanks to its excellent storage capacity.

How to Use Immersion Wort Chiller?

So, let’s finally check out how to use the chillers, starting with the immersion chillers.

This is optional, but we highly recommend that you clean the chiller thoroughly as it will be going directly into the wort.

Attach both tubes to the chiller. One tube should be connected to the faucet or hose, and the other should be in the sink for the hot water to exit.

The next step is self-explanatory. Turn off the heat, put the chiller in the wort, and add the water.

After the wort hits a temperature of at least 80 degrees Celsius, remove the chiller and put the wort in the fermenter.

How to Use Plate Wort Chiller?

Now that you know how to use an immersion chiller, let’s take a look at the slightly more complicated method.

This is not optional here. Make sure every tube is thoroughly clean as it will make contact with hot wort, which is easily contaminated.

Step 2: Get Your Mise En Place

This step makes things difficult. You need to position the wort chiller in such a way that the wort can easily enter the chiller with the help of gravity and exit into a separate tub.

Step 4: Sit Back and Let the Magic Happen

And that’s it. Turn on the water and let the wort dispense, bringing an end to the process. The cooled wort will be extracted in a maximum of 10 minutes.

And voila, it’s that simple. You’ve completed the first steps to becoming one awesome brewer. You should now have no doubts whatsoever on how to use wort chiller.

With this knowledge, brewing should be a lot of fun and as easy as taking candy from a kid. But we hope you do both of these activities responsibly. Don’t over-drink and only take the candy from the kid if he or she is a brat.

We hope this article was both fun and easy to follow. We wish you luck in your future brewing experiences.